I’ve had a few mishaps in my life, who hasn’t, right!? Well, I’ve managed to be involved in several car crashes in my life. All of which I can now see (retrospective eyes are visionary) were “signs”.

Signs that I was in the wrong place at the wrong time, some would say that was obvious as I managed to have a car crash, but I mean I was on the wrong path, my life was going the wrong way and I wasn’t listening. I was ignoring everything that was thrown in my way to swerve me back on course, so my guides had to take drastic action. And they did, not once, or even twice, but several times.

The first time, my Dad had bought me a car for my 17th birthday, it was a surprise, I was overjoyed, and impatient to drive it. The only trouble was I hadn’t passed my driving test. Ah, but I was resourceful, there were ways around that. So I recruited a friend who had passed and she sat beside me as we set off on our journey to the pub. THE PUB… this was back in 1985, no seatbelts, having a beer and driving was acceptable (mostly) and girls went to the pub. At the time I was at secretarial college, bored out of my mind, but learning a skill to fall back on should I not get married. Remember this was 1985, back then I knew I was for greater things, but marriage and kids was also high on the agenda. The thing is I should have been expanding my mind, I am clever, academically clever and I had settled down to learn how to type!? This crash was my fault, I pulled out rashly (so impatient) and a car coming the other way crashed sideways into me. I had to be cut out of the car, I got the bus home, crying that I had killed my birthday present, not realising that I had closed around my heart, from fear and muscular response.

I stayed at college, went to work in the City of London, got married and when pregnant with my son was rear ended by a truck, OUCH… a night in hospital… did I notice, that I was unhappy, did I notice that I wasn’t being me… NOPE…. Track forward to aged 30, I’m a passenger, my husband the driver, a gentle tap from the car behind us in traffic, and it was as though I’d been hit by a bus. I was in agony, whiplash like you’d never believe and migraines to accompany it. Again, did I realise, I was unhappy, that having to go to sleep everyday with migraine headache was unusual, that I couldn’t function in the life I had created. No I did not. I looked at all the external situations and blamed them. I was a victim to my body, to my marriage, to my childhood, and most of all to these accidents. 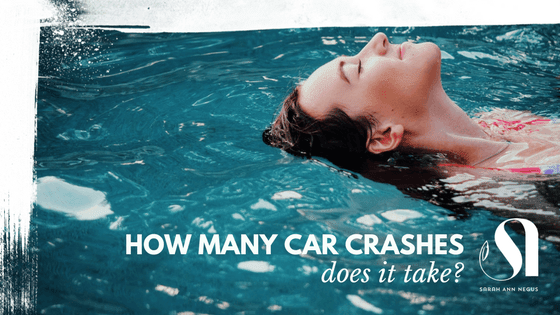 I was desperate now though. Looking for something to help me, physical pain, migraine and emotional pain in the form of depression together with auto-immune disorders should have told me that I was unhappy, they didn’t. I thought I was unlucky and was looking for a pill to cure it all. Instead I found pilates, a spiritual teacher and healing. This was the beginning of my life’s turn around. This was the beginning of me calling back my power to me from all the places that I had spread it. My parents, my husband, my extended family (I had 3 step children), my friends. This was when I began to realise that I had the ability to change how I felt in my body and my mind.

The final car crash came in 2010, I was already divorced and in another relationship. One where my partner took me for granted, lied to me and drained me energetically, financially and brought forth such anger from within me that sometimes I didn’t know what to do. That crash, was a head on collision, I was lucky as it was ‘only’ soft tissue injuries, a haematoma in my right buttock and awful sciatica that debilitated me for 9 months. That relationship didn’t last my recovery and I can see completely why I needed a wake up call, as I said earlier, retrospective eyes are visionary!

I have now decided there will not be any more car crashes in my life. I have worked through many things and have a clear understanding of what my inner guidance sounds like. There will not be anymore wake up calls to push me back on the right path.

I am here, teaching, mentoring and helping others grow their spiritual gifts, this is exactly where I’m supposed to be, I finally listened.